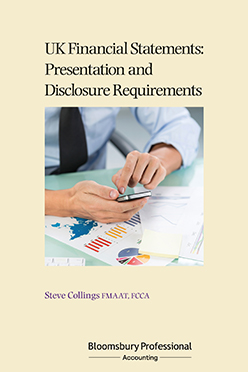 This publication explains how the disclosure requirements under new UK GAAP (and EU-endorsed IFRS) should be prepared. This commentary offers preparers of financial statements detailed guidance on getting the accounts and associated disclosure requirements correct under the FRC's reporting framework following the triennial review amendments to UK GAAP. It also reflects Republic of Ireland company law amendments in respect of FRS 102, Section 1A and FRS 105.

Rather than focusing on disclosure requirements only, this commentary is a 'one-stop-shop' which focuses on the wider issues around financial statement preparation. Various areas of the Companies Act 2006 require differing levels of disclosure depending on whether the entity is a micro-entity, small company, medium-sized or large business; and this book is structured in such a way that each type of business is covered in its own chapter, hence making each chapter a standalone section depending on the size of the entity concerned.

Detailed explanations of why certain things are done and disclosed are incorporated within each chapter to enable preparers to understand why they are disclosing certain items. Bloomsbury Professionals Example Financial Statements should be referred to alongside this commentary.

Impact of the ‘mini-budget’ on deferred tax

Chancellor Kwasi Kwarteng announced in his ‘mini-Budget’ on 23 September 2022 that the increase in corporation tax rate to 25% was being reversed, and the headline rate of corporation tax was to remain at 19%. This was, of course, welcome news for companies who do generate large profits because it saves them cash. The reversal was in response to the government’s plans to stimulate economic growth and promote investment.

For companies not reporting under FRS 105, any change in corporation tax rates will have an impact on the calculation of deferred tax in the statutory financial statements. This is because a new rate will generally be applied for deferred tax purposes before the ‘effective’ date of the new rate for corporation tax purposes, due to the ‘substantively enacted’ approach accounting standards take.

The measurement of deferred tax uses the tax rates and laws that have been ‘… enacted or substantively enacted by the reporting date that are expected to apply to the reversal of the timing difference.’ [FRS 102, para 29.12]

The term ‘substantively enacted’ is defined in FRS 102The Financial Reporting Standard applicable in the UK and Republic of Ireland as follows:

Tax rates shall be regarded as substantively enacted when the remaining stages of the enactment process historically have not affected the outcome and are unlikely to do so.

A UK tax rate shall be regarded as having been substantively enacted if it is included in either:

a) a Bill that has been passed by the House of Commons and is awaiting only passage through the House of Lords and Royal Assent; or

b) a resolution having statutory effect that has been passed under the Provisional Collection of Taxes Act 1968. (Such a resolution could be used to collect taxes at a new rate before that rate has been enacted. In practice, corporation tax rates are now set a year ahead to avoid having to invoke the Provisional Collection of Taxes Act for the quarterly payment system.)

A Republic of Ireland tax rate can be regarded as having been substantively enacted if it is included in a Bill that has been passed by the Dáil.

Hence, when a new tax rate is announced prior to the balance sheet date, but the enactment formalities have yet to be completed, the entity will need to assess whether the tax rate has become substantively enacted. This will, of course, depend on the entity’s balance sheet date.

Under the original plans, the 25% rate of corporation tax became substantively enacted on 24 May 2021. Hence, deferred tax balances for balance sheet dates ending on or after 24 May 2021 were remeasured at 25% or at the marginal rate where taxable profits were expected to fall between £50,001 and £250,000. Companies that were expected to generate taxable profits of £50,000 or less continued to measure deferred tax balances at 19% so there was no effect on such entities.

The mini-Budget on 23 September 2022 reverses the planned corporation tax increase but it is important to emphasise that for deferred tax purposes, the enactment process for the reversal does not happen straight away and remeasurement at 19% will only happen once the headline rate of 19% has been substantively enacted. At the time of writing, the timing of the legislation required to reverse the increase was unknown, but the link provided above should allow interested parties to keep a track of the developments in this area.

Steve Collings FCCA is a director at Leavitt Walmsley Associates, Chartered Certified Accountants based in Sale, Cheshire where he trained and qualified. Steve is the author of several titles for Bloomsbury Professional including Group Accounts under UK GAAP, Financial Reporting for Unlisted Companies in the UK and Republic of Ireland and Financial Statements: Presentation and Disclosure Requirements. Steve has close connections with various professional bodies producing authoritative material, articles and courses and represents the Association of Accounting Technicians on the CCAB and Technical Partners Committee at the Financial Reporting Council.