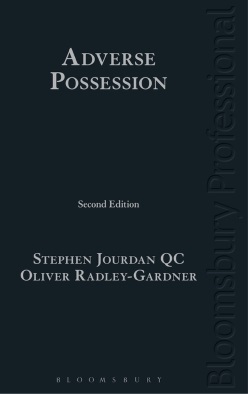 The new edition of Adverse Possession has been extensively revised and updated to take account of legislation and case law including Land Registration Rules 2003, Adjudicator to Her Majesty's Land Registry (Practice and Procedure) Rules 2003 and Land Registration (Referral to the Adjudicator to HM Land Registry) Rules 2003. This book uniquely deals with the subject in detail, providing a full treatise on the law, referring to both English and Commonwealth authorities. It also examines the various issues of principle and practice which arise including title, meaning and elements of possession, the running of time, estoppel and human rights considerations.

Stephen Jourdan QC was a solicitor at Theodore Goddard from 1985-1989 when he became a barrister. He joined Falcon Chambers in 1990 and took silk in 2009. His practice covers all aspects of property and agricultural litigation, including insolvency, partnership, professional negligence, animal health and pollution claims, and acting as arbitrator and independent expert. He is a Deputy High Court Judge, a Civil Recorder, a judge of the Land Registration Division of the Property Chamber of the First-tier Tribunal, the author of “Adverse Possession”, now in its second edition, and the consultant editor for the title “Boundaries” in the latest edition of Halsbury's Laws.

Oliver Radley-Gardner is a barrister at Falcon Chambers.