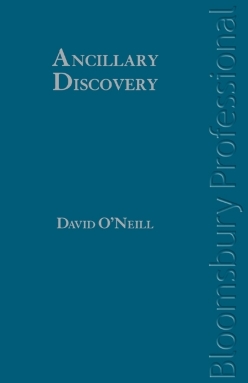 This title deals with disclosure of information outside the Rules of Court, for example, as an independent action, in aid of tracing remedies, in aid of Mareva injunctions or Anton Piller orders, or, in the Republic of Ireland, the Personal Injuries Assessment Board Act.

This book deals with ancillary discovery in Ireland (North and South), England and Wales.

There has been major reform of civil procedure in the relevant jurisdictions in the last 10 years. In England and Wales, and in personal injuries actions in Ireland, there has effectively been abandonment of the writ system of pleading, meaning that parties are required to furnish much more detail in their originating document. In England and Wales, and in Northern Ireland, potential for the action for discovery has been greatly expanded by the decision of the House of Lords in Ashworth v MGN. The last 10 years have also seen the incorporation of the European Convention on Human Rights in all parts of Ireland and Britain, which has had impacts on the right of access to journalists' sources, and on the illegal obtaining of evidence.

David O'Neill BCL BL has been at the Bar since 1994