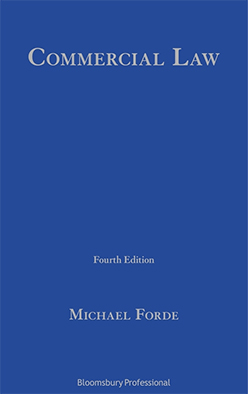 This comprehensively updated 4th edition of Michael Forde's Commercial Law will ensure practitioners can continue to turn to this book for the accurate and authoritative information they require. Its chapters cover the following topics and cross-refer to the principle works on each of the subjects listed in the Table of Contents.

Michael Forde's Commercial Law has been an essential tool for law practitioners since it was first published in 1990. Now the widely updated 4th edition will ensure practitioners can continue to turn to this book for the accurate and authoritative information they require. The essential coverage includes consumer law initiatives based on EU Directives, plus significant commercial case law. It outlines the emergence of and variety in regulation regimes and deals with insolvency rules in Ireland as well as the credit union sector.

Since the last edition published in 2005 this title has been updated to include the vast amount of case law in Ireland and the EU as well as relevant case law in the UK and Canada. It also deals with the following legislation: