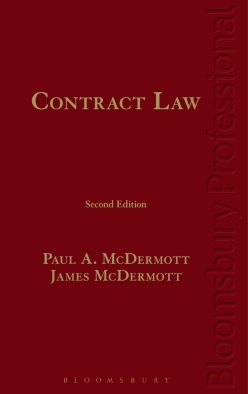 Contract Law, Second Edition is a comprehensive account of Irish contract law and contains all of the developments since the first edition was published in 2001.

- How to successfully make contracts

- Remedies other than damages, namely specific performance, injunctions and restitution

The law relating to contracts is set out and explained under clear headings and in straightforward language. In addition, every major Irish case on contract law is considered. Particular emphasis is placed on practical matters such as the construction of contracts, breach of contract and contractual remedies.

A large number of new cases from the High Court, Court of Appeal and Supreme Court on every area

Written by a practitioner who is also an academic, this book sets out the principles and case law in a clear and structured manner with easy to use headings.

Practitioners, students and anyone who has to deal with contracts in the course of their work will benefit from this most welcome new edition.