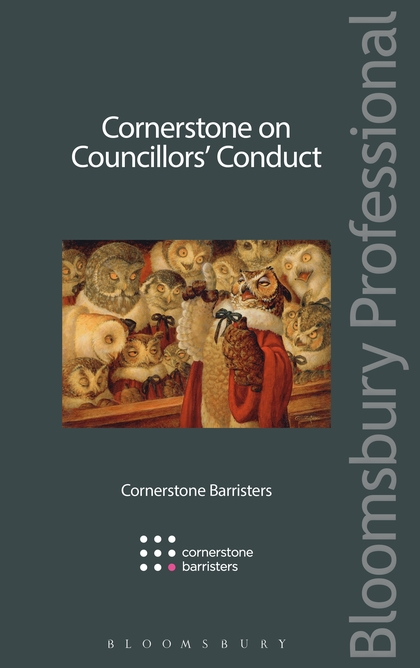 Cornerstone on Councillors' Conduct identifies and explains the law following the changes implemented by the Localism Act 2011 in relation to the standards system governing the conduct of elected members in Local Government.

INTRODUCTION: Covers the history of law relating to councillors' conduct, including events leading up to Nolan, the outcome of Nolan and the Localism Act and governance framework for local authorities.

THE STANDARDS REGIME: Covers the framework for the setting and enforcement of the new standards, new local authority duty to promote and maintain high standards, local codes and the procedure for adopting a voluntary Code and the substantive content of Codes, to whom the Codes apply, enforcement of the standards regime: procedures for enforcement, decisions whether to investigate, procedures for investigation, sanctions (including withdrawal of party whip) and roles of monitoring officers, CEO, Group Leaders.

Philip Kolvin QC is a barrister and Head of Licensing at Cornerstone Barristers, Gray's Inn, London. He is also Patron of the Institute of Licensing, the national body for licensing professionals, and Chairman of Best Bar None and Purple Flag. Philip is widely published in the field of licensing and is the editor of Licensed Premises: Law, Practice and Policy, Gambling for Local Authorities: Licensing, Planning and Regeneration and Sex Licensing. Philip is an Associate Tenant at Kings Chambers, Manchester, Leeds and Birmingham.