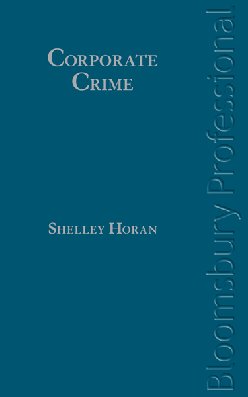 This title provides a comprehensive treatise on all the issues that arise in the context of the prosecution and sentencing of corporate crime offences. Corporate Crime is particularly relevant in light of the high profile Irish banking and financial scandals. As a result, there have been many proposals for reform in the area.

Included in this text are matters such as corporate criminal liability, individual liability (whether of senior officers or lower-ranking employees), the prosecution and sentencing of corporate crimes, constitutional rights (with a particular emphasis on those rights relating to the investigation and prosecution of regulatory crimes), confiscation of the proceeds of 'white-collar crimes', the offence of money laundering and its connection to companies and the disqualification of corporate officers. Further examined in detail are the broad range of offences that may be charged against corporations and their officers or employees, including fraud offences, bribery and corruption, revenue offences, competition law offences, offences under the Companies Acts, market abuse offences, health and safety offences and corporate manslaughter.