The Costs and Funding of Civil Litigation: A Comparative Perspective

Copyright: 2010 The editors and contributors severally 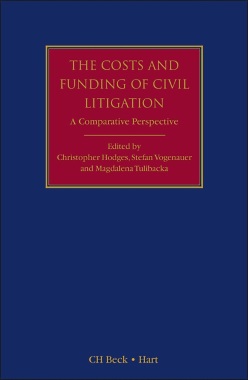 The Costs and Funding of Civil Litigation: A Comparative Perspective

This book contains the first major comparative study of litigation costs and methods of funding litigation in more than 30 jurisdictions. It was linked with the most comprehensive review of costs ever carried out in England and Wales by Lord Justice Jackson in 2009 and benefited from the assistance of leading practitioners around the globe.

The study analyses the principles and rules that relate to paying courts, witnesses and lawyers, and the rules on cost shifting, if any. It also notes the major ways in which litigation can be funded, identifying the global trend on contraction of legal aid, the so far limited spread of contingency fees, and the growing new phenomenon of private third party litigation funding. The study also presents the results of nine case studies of typical claim types, so as to give a first overview comparison of which countries’ legal systems are cheaper or more expensive.

'Dr Hodges, Professor Vogenauer and Dr Tulibacka have conducted an excellent and thorough comparative study of litigation costs and funding across a wide range of jurisdictions ('the Oxford study’). The Oxford study is important, because it provides both context and background for any critical examination of our own costs and funding rules… I commend this book both for its breadth and detail and also for its percipient commentary. This work will make a valuable contribution to the debate which lies ahead about how the costs and funding rules of England and Wales should be reformed in order to promote access to justice.'

From the Foreword by Lord Justice Jackson, Royal Courts of Justice, 16th July 2010.