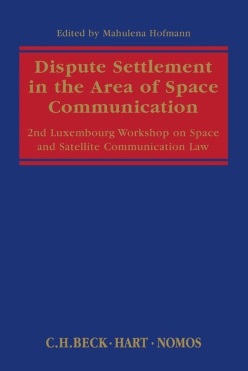 Which dispute settlement mechanisms are available in the area of space communication? Their choice is clearly determined by the legal character of those who are parties in the dispute – States, international intergovernmental organisations, private entities or even individuals. In this study the analysis of various dispute settlement mechanisms demonstrates that not all existing mechanisms are equally capable of serving this purpose. It appears that the parties to a dispute often prefer to search for a consensus and an arbitration procedure prior to taking part in international adjudication. The cases where formalised international courts are involved in this area have been relatively rare. Space communication disputes may often be similar to investment disputes; the decisive factors of this similarity are the high costs of investment, its international character, the necessity to maintain working relationships with the opposing party of the dispute after the conclusion of the dispute, the difficult technical background to the cases, little trust in court procedures, low indemnification and the fear of non-implementation of court decisions. As a consequence, it can be expected that mediation, negotiation and arbitration, but also alternative dispute settlement mechanisms will remain the main mechanisms of dispute settlement in the area of space communication in the near future.

This workshop and book were kindly supported by