E-Commerce and Convergence: A Guide to the Law of Digital Media 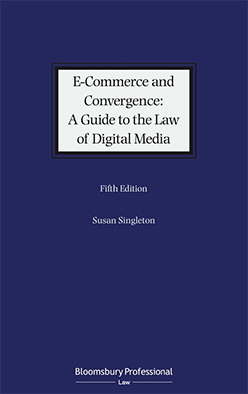 E-Commerce and Convergence: A Guide to the Law of Digital Media

Since the last edition ten years ago the pace of technological and legal change has stepped up even more than before with previous editions. New legislation is in force such as the General Data Protection Regulation (GDPR) and UK Data Protection Act 1998 and from 1 January 2021 "UKGDPR". The UK Information Commissioner has been looking closely at "Ad Tech" and what has become known as "big data" and how data are gathered on-line.

Intellectual Property law in the ecommerce area has also changed. There is a very recently agreed new EU copyright directive which is due to be implemented in the 27 EU member states (but not the UK) in 2021.

The post-Brexit transition period expired on 31 December 2020 which has implications for the application of ecommerce law in a number of different areas which are all addressed in the new addition.

The 2010 EU vertical regulation and guidelines have recently been built on with the EU "geo-blocking" regulation and the related EU Commission's initiatives in relation to ecommerce in the anti-trust area.

Other updates include the distance selling legislation in the Consumer Contracts (Information, Cancellation and Additional Charges) Regulations 2013 and the Consumer Rights Act 2015 which came into force since the last edition.