Equality Law in the Workplace 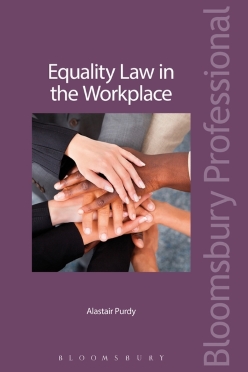 Equality Law in the Workplace

Equality Law in the Workplace (originally titled: Employment Equality Law in Ireland) considers the equality issues that employers need to be aware of and deal with on a daily basis. This practical book covers pre-employment, during employment and post employment in Ireland.

Alastair Purdy, Partner at Purdy FitzGerald started his early career with the Irish Business and Employers Confederation (IBEC) where he represented major domestic and international companies on all Employment Law related matters. He has held senior HR positions in industry including being the General Manager HR ACC Bank, the Group Head of HR Dunnes Stores and the World Wide HR Director (Manufacturing) for Analog Devices. In 2006 Alastair set up his own Solicitors Practice, with the purpose of bringing his unique blend of practical and legal advice to employers.

Alastair has advised the Government on pay issues and represented the International Labour Organisation overseas. Alastair is the author of a significant number of published articles on Employment Law and is also the author of a book 'Termination of Employment a practical guide for Employers'.

Alastair is a graduate of NUI Galway having obtained both a BA Degree in Economics (1986) and an MA Degree in Economics (1987). Alastair has extensive knowledge of the Multinational sector having worked there for a number of years in Ireland and abroad. He is widely recognised as being one of the foremost experts in Employment Law in this jurisdiction.