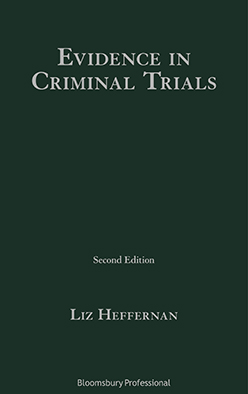 Evidence in Criminal Trials is the first Irish textbook devoted exclusively to the subject of criminal evidence. This popular title provides comprehensive, detailed coverage of law and practice on the admissibility of evidence, the presentation of evidence in court and the pre-trial gathering and disclosure of evidence. The work combines analysis of traditional evidentiary doctrine with discussion of its application in practice and takes account of policy development and reform. The subject of evidence is discussed in the broader context of fundamental rights protection under the Constitution, the ECHR and EU law.

This updated and extended second edition captures the many significant changes in the law of criminal evidence in recent years. The role of vulnerable witnesses in court proceedings is explored in new chapters on children and vulnerable adults, complainants in sexual offence trials, and victims of crime. The landmark Supreme Court decision in DPP v JC is analysed in an extended chapter on unlawfully obtained evidence and important case law developments relating to confessions and the right to silence are discussed in a detailed chapter on pre-trial interviews with suspects. Other chapters explore the case law of the Supreme Court and Court of Appeal on testimony, corroboration, technological evidence, privilege and disclosure. The Law Reform Commission’s recommendations in its 2016 Report on Consolidation and Reform of Aspects of the Law of Evidence are considered in the book’s discussion of hearsay and expert evidence.

This book will appeal to individuals working and studying in the areas of criminal law and evidence. It will be essential reading for legal practitioners, academics and law students and it will be of interest to others engaged with criminal justice and the court system.