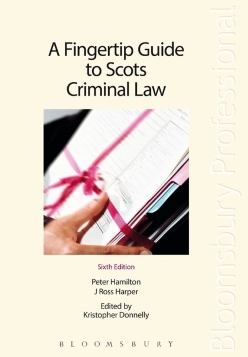 The third edition of the highly regarded "McCall Smith and Sheldon" explains all the basic principles relating to Scots criminal law. The third edition takes account of significant changes in substantive law, including the introduction of the Human Rights Convention into Scots Law. Case law developments take in the recasting of the law relating to indecency, scrutiny of the peculiarly Scots crime of Breach of the Peace, examination of the crime of the Murder, including the meaning of 'wicked recklessness', diminished responsibility, provocation and self defence, as well as analysis of what constitutes Contempt of Court.

It also considers the many legislative developments including the Sexual Offences (Scotland) Act 2009, the Corporate Manslaughter and Corporate Homicide Act 2007, and changes arising from the Criminal Justice and Licensing (Scotland) Bill 2009.