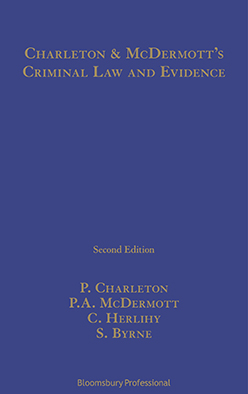 This second edition of what was in 1999 an acclaimed work, has been completely rewritten. In approaching this, the authors have considerably increased the analysis of the theoretical aspects of criminal law and strengthened citations of academic literature and comparative case law while keeping the narrative concise and focused for easy use by practitioners.

Key benefits to readers include a complete overview of criminal law theory; a new series of chapters on the law of evidence as it applies in the fraught circumstances of a criminal trial; a much more analytical approach to the general part and to criminal defences; and the comprehensive coverage of all the major, and many minor, areas of indictable crime.

Since the last edition, commentary and case law on sexual offences has proliferated as have legislative interventions; a completely new scheme for dealing with property offences was necessitated by a series of recent statutes; company law and competition offences have assumed a greater significance; and the range of offences covered has had to be increased in order to ensure a comprehensive coverage of this most sensitive and politically charged aspect of law.