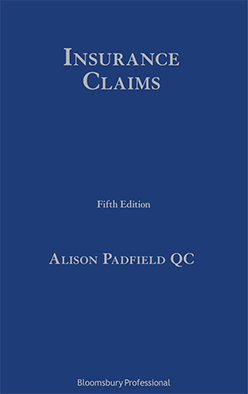 Insurance Claims provides an accurate summary of the law as it relates to insurance claims, which means largely, but not exclusively, claims against insurers and insurance brokers. It is aimed at those involved in the application of the law on a daily basis, whether as solicitors, barristers or insurance claims handlers.

The new edition is one of the first titles to cover and offer detailed commentary on the Insurance Act 2015 which comes in to force in August 2016.

The Insurance Act 2015 comes into force on 12 August 2016 and makes far-reaching changes to insurance law in England and Wales: Introduces a new pre-contractual duty of fair presentation in place of the duty to disclose material facts/duty not to misrepresent material facts; Makes significant changes to remedies for breach of pre-contractual duty, breach of warranty and breach of other terms 'not relevant to the actual loss'.

The Enterprise Act 2016 amends the Insurance Act 2015 and introduces a general right to damages for late payment of insurance claims (with effect from 4 May 2017).

Teal v Berkley in the Supreme Court on the order in which losses are allocated to policies of insurance.

Aspen v Adana in the Court of Appeal on the meaning of 'product' and cover for defective installation in product and public liability insurance.

International Energy Group Ltd v Zurich Insurance plc in the Supreme Court on contribution between insurers in cases within the 'Fairchild enclave'.

AIG v ILP in the Court of Appeal on aggregation in solicitors' indemnity insurance.