Copyright: 2013 The editors and contributors severally 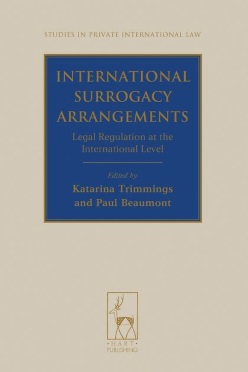 This book addresses the pressing challenges presented by the proliferation of international surrogacy arrangements. The book is divided into three parts. Part 1 contains National Reports on domestic approaches to surrogacy from Argentina, Australia, Belgium, Brazil, China, Czech Republic, France, Germany, Greece, Guatemala, Hungary, India, Ireland, Israel, Mexico, Netherlands, New Zealand, Russia, South Africa, Spain, Ukraine, United Kingdom, United States and Venezuela. The reports are written by domestic specialists, each demonstrating the difficult and urgent problems arising in many States as a result of international surrogacy arrangements. These National Reports not only provide the backdrop to the authors' proposed model regulation appearing in Part 3, but serve as a key resource for scrutinising the most worrying incompatibilities in national laws on surrogacy. Part 2 of the book contains two contributions that provide international perspectives on cross-border surrogacy such as the 'human rights' perspective. Part 3 contains a General Report, which consists of an analysis of the National Reports appearing in Part 1, together with a proposed model of regulation of international surrogacy arrangements at the international level written by the two co-editors, Paul Beaumont and Katarina Trimmings.

The research undertaken by Katarina Trimmings and Paul Beaumont from 2010 to 2012 was funded by the Nuffield Foundation.