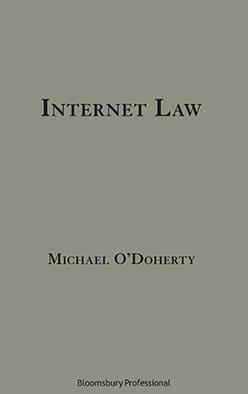 The law in Ireland regarding causes of action involving the internet is a rapidly growing area of law and litigation. This book examines issues such as privacy, data protection, defamation, data protection, crime, intellectual property and employment, all through the prism of online behaviour. This book examines key pieces of legislation such as the E-Commerce Directive, GDPR, and Defamation Act 2009; forthcoming legislation such as the Digital Content Directive and proposed Irish legislation to combat harmful online content.

With Ireland being the European base of many international IT and tech firms such as Google, Facebook, LinkedIn, Amazon and Twitter, it is anticipated that the Irish courts will be the forum for many important cases in the near future. Internet Law provides a comprehensive overview of the state of the law in Ireland, EU Member States, and other common law countries such as Canada, Australia and New Zealand. And in such a fast-developing area of law, the book also anticipates many of the issues that will face courts in the near future.

Key cases that this book considers include:

Google Spain [2014] – an in depth review of what exactly this case established, and the manner in which it has been interpreted in subsequent case law.

Lloyd v Google [2019] – in which the English Court of Appeal made a significant finding about the availability of damages for non-pecuniary loss arising from the breach of a person's data protection rights.

Monroe v Hopkins [2017] - the first UK case to consider at length defamation on Twitter, with an in-depth analysis of meaning, identification and how to assess the degree of publication via that medium.

Eva Glawischnig-Piesczech v Facebook [2019] – a significant recent decision of the CJEU on the liability of social media platforms for content posted by its users.

Sony Music v UPC [2018] - a Court of Appeal judgment on the duties of internet service providers to restrict the illegal downloading of copyright material by its customers.

Land Nordrhein-Westfalen v Renckhoff [2018] - a recent decision of the CJEU on the nature of copyright protection attaching to photographs which are uploaded to the internet.

Interflora Inc v Marks and Spencer plc [2011] - a decision of the CJEU which analyses the rights of an advertiser to use the trade mark of a rival company when promoting its services on the Google Ads service.

Barbulescu v Romania [2017] - a significant CJEU decision which sets out the restrictions to an employer's right to monitor the electronic communications of its employees.

CG v Facebook [2016], in which the Northern Ireland Court of Appeal considered the tort of harassment via social media, and the potential liability of Facebook for comments made by a user following notification of the alleged harassment.

Martin & Ors v Gabriele Giambrone P/A Giambrone & Law [2013]- one of several cases to consider the admissibility of evidence taken by a defendant from a plaintiff's social media account in order to question the latter's testimony.