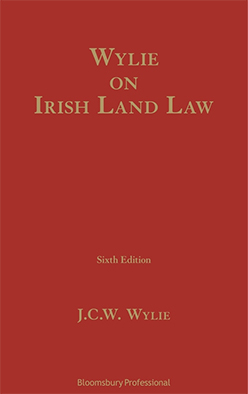 Written with both legal students and practitioners in mind, this highly specialist book is widely recognised as the definitive guide to Irish land law.

Comprehensive and clear, this title not only covers the subject of Irish land law with depth and detail, it also offers invaluable information on equity, trusts and succession. It is regularly cited as authoritative by Irish judges at the highest level.

Irish Land Law joins with John Wylie's other extensive work in conveyancing law and landlord and tenant law to cement Wylie's place as one the most esteemed authors in Irish property law. His other titles include Landlord and Tenant Law and Irish Conveyancing Law.

In addition, the new edition incorporates reference to new legislation, such as the Residential Tenancies (Amendment) Acts 2015, 2016 and 2019; Personal Insolvency (Amendment) Act 2015 and Land and Conveyancing Law Reform Act 2019.

This title will naturally be of great use to solicitors, barristers, students of land law and government departments. However, it will also be of interest to property consultants, real estate agents and financial institutions.