Byrne and McCutcheon on the Irish Legal System 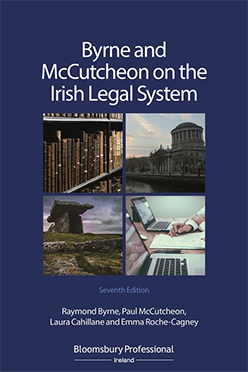 Byrne and McCutcheon on the Irish Legal System

This seventh edition of Byrne and McCutcheon on the Irish Legal System provides comprehensive treatment of the key elements of the legal system in Ireland, including the roles and regulation of legal practitioners, the organisation of the courts and the judiciary, and an analysis of the main sources of Irish law and their application in practice. It is essential reading for law students in Ireland, and practitioners will find it of great value.

The seventh edition has been fully updated to reflect recent key developments including:

fundamental reform of the legal profession under the Legal Services Regulation Act 2015, the commencement of the main regulatory powers of the Legal Services Regulatory Authority and the establishment of the Office of the Legal Costs Adjudicator; the increasing impact of information technology on the legal profession and the courts, accelerated in 2020 by the Covid-19 pandemic; the establishment of the Judicial Council under the Judicial Council Act 2019, and the roles of its committees; discussion of the system for appointing judges; the establishment of the Court of Appeal and the resulting impact on the Supreme Court; the Mediation Act 2017 and alternative dispute resolution in civil cases; the doctrine of precedent, including important case law from the Court of Appeal and the Supreme Court; significant developments in making legislation more accessible online, and analysis of the case law on the interpretation of legislation; the impact of recent constitutional decisions, including case law on suspended declarations of unconstitutionality, and the constitutional amendments on marriage equality and abortion; developments in EU law, including the potential impact of Brexit, and the growing impact on Irish law of more than 1,400 international agreements that Ireland has ratified.