The Land and Conveyancing Law Reform Acts: Annotations and Commentary 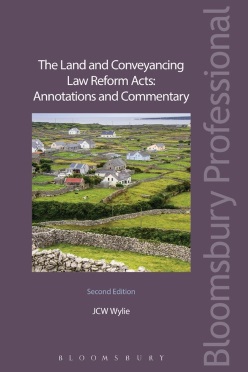 The Land and Conveyancing Law Reform Acts: Annotations and Commentary

The full text of the Land and Conveyancing Law Reform Act 2009 with annotations and commentary by Professor JCW Wylie, who as consultant to the Law Reform Commission and Department of Justice, Equality and Law Reform, played a major role in the drafting of the original Bill. As Professor Wylie says in the Preface:

"The drafter of an Act is wont to claim that he or she knows exactly what is intended, and having spent an inordinate time putting it into the words of a section, cannot understand why others, particularly lawyers, cannot see what is startlingly obvious! This is, of course, absurd and anyone who thinks that human language and phraseology is so precise that it can always be couched in terms totally free of ambiguity and doubt is naïve indeed! In writing the annotations which follow I have endeavoured to keep this in mind, in the hope that readers will obtain some benefit from them. I emphasise above all else that they are written entirely in my personal capacity and must not be treated as representing the views of anyone else, still less the views of the Department of Justice, Equality and Law Reform, the Law Reform Commission or any other body."