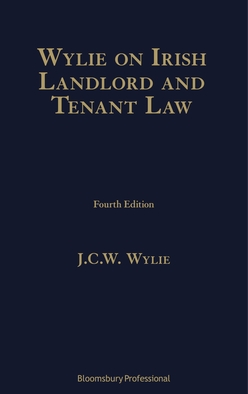 Long recognised as the definitive work on this area, Landlord and Tenant Law, 3rd edition comprehensively deals with all aspects of this subject relevant to the law in Ireland. It is essential for all practitioners with an interest in property law. The book covers everything from the basics (such as explaining the nature of the relationship between landlord and tenant) to more complex matters such as when disputes arise, and the controversial subjects of rent reviews and guarantees.

This is the eagerly awaited third edition of this flagship title and covers in detail the important legislation that has been enacted since the last edition, including: Residential Tenancies Acts 2004 and 2009, Landlord and Tenant (Ground Rents) Act 2005, Civil Law (Miscellaneous Provisions) Act 2008, Land and Conveyancing Law reform Act 2009 (s 132) and Multi-Unit Developments Act 2011.