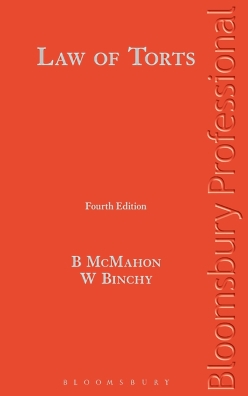 The eagerly awaited new edition of this title is the complete Irish tort law reference book and the contents have been extensively revised since the last edition was published in 2000. Key developments are detailed and relevant recent case law is examined. This book will be essential for both legal practitioners and people studying Irish law.

Bryan McMahon, former judge of the High Court, received his BCL and LLB degrees from University College Dublin before accepting a fellowship to Harvard Law School, where he was awarded the LLM in 1965. Mr Justice McMahon was subsequently Professor of Law and Head of the Department of Law in University College Cork for 20 years. In 1987, he went into private legal practice, while holding a part-time professorship at University College Galway. In 1999 he was appointed to the Bench as a Judge of the Circuit Court and in 2007 to the High Court, from which he retired in April 2011. Mr Justice McMahon has co-authored many legal texts, including Law of Torts (Fourth edition with printers); casebook in Irish Law of Torts; European Community law in Ireland, etc. Mr Justice McMahon has chaired, at the request of the government, The National Crime Forum, the National Archives Advisory Council, and Referendums for the Amendment of the Constitution. He has lectured extensively in Europe and USA on a variety of legal topics. He is currently Chair of the Governing Body of University College Cork, and also Chairman of the Abbey Theatre, Ireland's national theatre. He was awarded an LL.D (honoris causa) by University College, Dublin in 2012.

William Binchy BA BCL LLM (NUI) MA (DUBL) FTCD (1995), Barrister-at-Law, Honorary Bencher (King's Inns). William Binchy is Regius Professor of Laws. He was formerly a special legal adviser on family law reform to the Irish Department of Justice and Research Counsellor to the Law Reform Commission. He was a Commissioner with the Irish Human Rights Commission for two terms, from 2000 to 2011. He was Visiting Fellow at Corpus Christi College, Cambridge (Michaelmas Term 2002) and Visiting Fellow at the Institute of European and Comparative Law, Oxford (June 2011). He has authored and co-authored books on private international law, torts and family law and organises the Annual Workshop on Constitutionalism for African Chief Justices and Senior Judiciary, held at the Law School. He has represented Ireland at the Hague Conference on Private International Law on the themes of marriage and inter-country adoption and the Irish Human Rights Commission at the United Nations during the formulation of the UN Convention on the Rights of Persons with Disabilities. He was a member of the Committee on the Offences Against the State Acts, Chaired by the Hon. Mr. Justice Anthony Hederman. He has acted as consultant to the Irish Department of Foreign Affairs in relation to the Timor-Leste judicial system, making a field visit in August 2005. He has organised visits of the members of the Judiciary of Tanzania, Uganda and Lesotho to Trinity College Dublin and of members of the Irish Judiciary to several African countries.