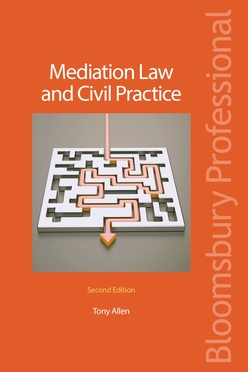 Mediation Law and Civil Practice, Second Edition examines the position of mediation within the civil justice system in England and Wales, providing an essential read for mediators, mediation providers, lawyers, judges, academics and students. The book traces the evolution of the relationship between the courts and mediation, discussing all the significant judgments relating to mediation over the last 25 years as well as exploring the key concepts at the heart of mediation and all the latest developments.

Mediation Law and Civil Practice also challenges the status quo by casting doubt on some decisions and generates alternative thinking around current legal and practice concepts.

‘Here you have all you need to know and more...this textbook will become the ADR bible. I unreservedly recommend it.’

‘Anything by Tony Allen is worth reading. As regularly demonstrated in his articles and blog posts he writes fluently, thinks originally and analyses critically’

Tony Allen is a solicitor and was for 12 years a Director of CEDR. He remains a freelance mediator specialising now in clinical claims. He has mediated a wide range of other disputes involving personal injury, public law, banking, construction, housing, partnership and professional indemnity, as well as general commercial claims. His work has included time limited mediations through the Central London County Court scheme, and he has been involved in a number of major multiparty mediations, including the Kenyan tribespeople’s claims against the Ministry of Defence and the retained organs mediations. His book Mediating Clinical Claims is also published by Bloomsbury Professional.