Practice and Procedure in the Superior Courts 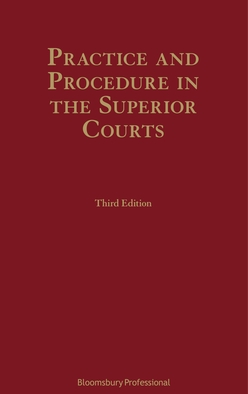 Practice and Procedure in the Superior Courts

This hugely popular title from one of Ireland's leading barristers has been fully updated and revised. Anybody practising in the Superior Courts of Ireland will find it indispensable.

The 3rd edition contains the consolidated text of the rules that govern procedure in the Supreme Court, the Court of Appeal and the High Court, together with an accessible and user-friendly commentary on each rule. It is essential for any lawyer whose practice involves any or all of those courts.

Each annotation gives details of the reported and unreported decisions of the courts in Ireland, North and South, practice directions and relevant legislative references, including the impact of: