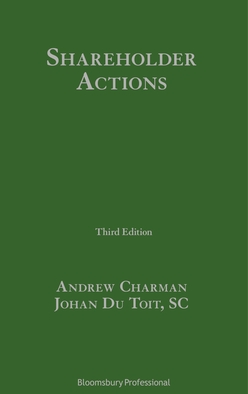 Shareholder Actions is a comprehensive guide to the possible actions shareholders may be entitled to pursue, on whichever side of the dispute they might be involved. As well as unfair prejudice and derivative actions, and the many personal actions arising from the Companies Act 2006, the book covers actions based in common law and equity, as well as actions based in other statutory law. It also explores occurrences of directors owing fiduciary duties directly to shareholders and the 'no reflective loss' rule providing a clear view of its scope and its limitations.

The book refers to judgments in other related jurisdictions when it is necessary to substantiate a submission not already fully and authoritatively addressed by English law. Scottish cases are referred to where the House of Lords or Supreme Court have dealt with an issue, or where the point of law overlaps with English law.

There are separate chapters on taxation issues, shareholder claims in Australia, due the large cross pollination between English and Australian law and, for comparative purposes, on Canada where a very different approach is taken with its common law based system.

The second edition contains new and updated material on all of the topics covered in the first edition including:

- Recent decisions on unfair prejudice petitions under section 994 and appropriate remedies, including the basis of valuation of minority interests, including Re Coroin Limited[2013] EWCA Civ 781; Graham v Every & Others[2014] EWCA Civ 191 and Re Charterhouse Capital Limited[2015] EWCA Civ 536.

- More than half a dozen new cases on when permission should be granted for shareholders to bring derivative claims and clarification of the law in relation to double derivative claims (which has taken the form that was predicted in the first edition).

- New material on when the corporate veil may be pierced following the decisions in Prest v Petrodel[2013] UKSC 34 and VTB Capital plc v Nutritek International Corp[2013] UKSC 5 and detailed consideration and discussion of the litigation following the collapse of Madoff Securities and the claims brought by shareholders in Lloyds Bank plc relating to the purchase of HBOS.

- New chapters on the comparative position in South Africa (to go along with updated analyses of the position in each of Australia and Canada) and on the particular procedural issues relating to unfair prejudice positions under section 994, derivative claims, just and equitable winding up petitions and personal claims brought under Part 8 of the Civil Procedure Rules.