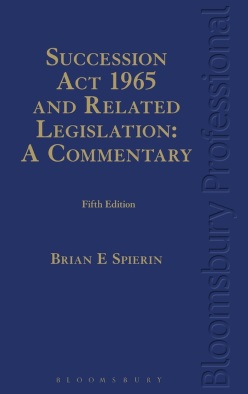 Based on McGuire's seminal 1967 work, this fifth edition examines the Succession Act 1965 in detail and examines other related legislation which impacts upon succession.

Each section of the 1965 Act (as amended) is set out in full, and followed by a detailed narrative commentary which explains the sections and examines how they have been interpreted by the courts. Up-to-date appendices contain the relevant Probate Office, Superior Courts and Circuit Courts forms.

Brian Spierin is a leading expert in Ireland on the Law of Succession and Probate. He is in practice at the bar since 1985 and was called to the inner bar in 1999. He has been involved with wills for nearly forty years, as a member of staff of the High Court Probate Office, a law lecturer, a published author and as a junior and senior counsel. He is the author of The Succession Act and Related legislation: A Commentary 4th Edition and Wills, Irish Precedents and Drafting, 2nd Edition.