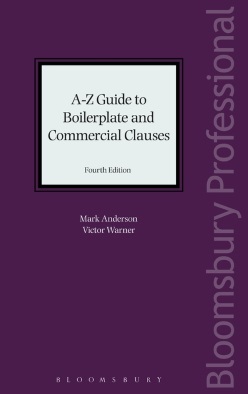 A lot of people when drafting an agreement will concentrate on the core commercial terms, rather than the boilerplate clauses. Some see the word "boilerplate" as referring to "unimportant" contract terms. This is very dangerous as a failure to consider all the provisions of a commercial agreement can have serious consequences. Often these consequences will come when it is too late to do anything about the contract terms, ie after the agreement is signed.

A boilerplate clause sometimes deals with important operational issues such as the law of the contract or how notices may be sent. On other occasions, the clause deals with commercial issues that may not seem important, until a problem arises. For example, a force majeure clause only becomes significant if a party cannot perform its obligation due to circumstances beyond their control with such circumstances arising rarely, but when they do the force majeure clause comes into its own.

A-Z Guide to Boilerplate and Commercial Clauses guides the user through each clause, explaining its purpose, considering its relevance in an agreement, discussing drafting issues and providing illustrative examples. The legal commentary and practical guidance helps the user to better understand the legal framework underpinning a boilerplate clause and how the courts are likely to view boilerplate and commercial clauses in the event of a dispute.

For ease of reference the clauses are arranged in alphabetical order ranging from Acknowledgements to Warranties and are laid out in a modern, clear and accessible format. A set of typical boilerplate terms as they might be found in a commercial contract is included as an appendix.

Since the third edition, major developments in case law and legislation have resulted in the revision of existing clauses and the development of new standard clauses.