Guide to the Companies Act 2014 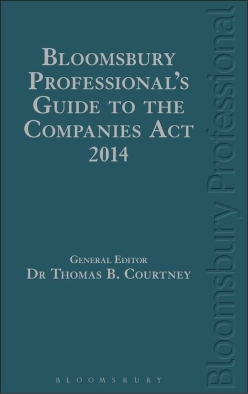 Guide to the Companies Act 2014

In recognition of the fact that the Companies Act 2014 is the most significant change in Irish corporate law in two generations, Bloomsbury Professional persuaded its company law authors to agree to speak at a seminar and to contribute a chapter on the papers they present. I was asked to chair the seminar and agreed to deliver three papers. As chairperson of the seminar, the task of editing this book also fell to me. Given the calibre of the authors and their total command of their areas of expertise, however, my role as editor was a very easy one.

This book is a guide to the main changes introduced by the Companies Act 2014. It does not purport to be a comprehensive or complete analysis of the Act, Irish company law or, indeed, all of the changes introduced. For that type of treatment, you will have to await the new editions of Nessa’s Company Law Compliance and Enforcement, William’s Banking and Security Law in Ireland, Irene (and Gerard’s) Corporate Insolvency and Rescue, Lyndon’s Companies Act 2014 and, I suppose, my own (with contributions from Brian and Dáibhí) Law of Companies. In persuading us to dip our toes into the new sea of company law, Bloomsbury Professional have whet our interest in writing new editions of our own books as the soundings I have taken from my colleagues in this project suggest that work is afoot.