Copyright: 2012 The editor and contributors severally 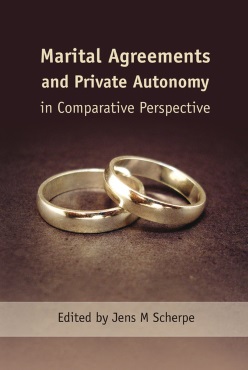 This book deals with a subject that has recently been the focus of debate and law reform in many jurisdictions: how much scope should spouses have to conclude agreements concerning their financial affairs - and under what circumstances should such agreements be binding and enforceable? These marital agreements include pre-nuptial, post-nuptial and separation agreements.

The book is the result of a British Academy-funded research project which investigated and compared the relevant law of England and Wales, Australia, Austria, Belgium, France, Germany, Ireland, the Netherlands, New Zealand, Scotland, Singapore, Spain, Sweden and the jurisdictions of the United States. In addition to chapters on these jurisdictions, the book includes a chapter on the 'English practitioner's view'. It also provides a comparative analysis of the different matrimonial property regimes and the rules on marital agreements that explores underlying themes and principlesand makes recommendations for regulating marital agreements.

A key theme is the function and effect of marital agreements in the different jurisdictions. Thus, each chapter first explains the underlying 'default' rules for ancillary relief/matrimonial property and maintenance. It then analyses the current rules for marital agreements, and gives a brief account of the private international law rules.

The book provides a comprehensive source of reference on ancillary relief/matrimonial property and maintenance and the rules on pre-nuptial, post-nuptial and separation agreements in 14 jurisdictions. It offers guidance for academics and practitioners dealing with international matters, and a basis for discussions on law reform.