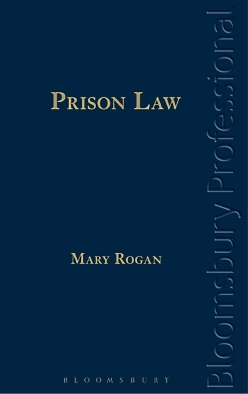 Prison litigation is becoming increasingly common in Ireland. Prison numbers are at an all-time high and conditions in many Irish prisons have been criticised by international and domestic human rights bodies, such as the Irish Penal Reform Trust and the Inspector of Prisons who have voiced concern about the lack of accountability for decisions taken by prison administrators on issues such as discipline, transfers and release. The rights of prisoners are a key focus of the book. These rights are examined in relation to prison conditions, contact with the outside world, discipline, remission, transfer and release.

Prison Law analyses practical issues that prison law practitioners are likely to come up against, such as causes of action, evidential difficulties and time limits. The book sets out the position in Irish prisons of particular groups including women, children, foreign prisoners and those from an ethnic minority background and identifies areas in which the treatment of prisoners gives rise to concerns under the Constitution or the European Convention on Human Rights.